Quality, Passion, and Integrity
Innovation Since 1965

For over 55 years, Vella Bath & Kitchen has been designing functional and beautiful living spaces for homeowners throughout the Rochester, NY region. Vella understands the importance of our clients’ dreams and desires, and brings them to life through our design and construction experience.

Whether it’s our employees or the third generation of Vella to proudly be crafting beautiful spaces in your home,Vella Bath & Kitchen is about family. Frank Vella Jr. follows his father, Frank Sr., and grandfather, Salvatore Vella. 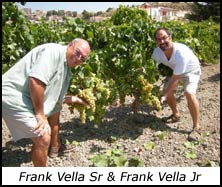 “We knew from our early discussions with you that the level of customer service you offer would be unsurpassed… Your dedication to coming up with just the right solution for our kitchen made our decision to choose Vella an easy one!”

When you have decided to make the investment of a new kitchen or bath, the team at Vella will provide you with the expertise and guidance that only a full-service remodeling company can. Through every phase of your project, you will find unsurpassed innovation from award-winning designers, installation by experienced and talented craftsman and support from our professional staff; all fully employed by Vella Bath & Kitchen and truly invested in the success of your project.

A strong commitment to Innovation allows Vella to remain in the forefront.Those fundamental values are shared by all of Vella’s employees, and are evident in their daily actions and business decisions.

We Are Here For You

We provide customers with peace of mind. We offer complete assistance and oversight through a time tested process that addresses all aspects of the project.

We Design For Our Clients

We listen, we get to know you. We ask questions and we listen some more. Our job is to provide solutions to your problem.

Our finished projects are not just function, our talented designers and craftsman bring your dream to the next level. We create spaces for you to come home to.

Growing up, Frank Sr. learned three core fundamental values from his father, Salvatore Vella, a mason: Take pride in the quality of your workmanship, have a sincere passion for your craft, and do it all with the utmost integrity.Despite only having $100 in his pocket and speaking very little English, in 1965 Frank left Italy in search of the “American Dream”.

As Frank Vella Sr.’s business in his new country grew, so did the need for the first showroom and product diversity. Plumbing and cabinet distributors were sought. In 1976, the Stone Road Showroom opened its doors in Greece, NY, and Vella Ceramic Tile became Vella Bath & Kitchen. 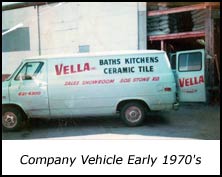 In order to spend time with his children, they would often accompany him on the jobs in hope they too, would grasp the trade. Frank Vella, Jr., his only son, did just that. At a very young age, Frank Jr. became interested in the business and assisted on the jobs and in the showroom.

As the 1980s began, Frank Vella Sr. put his focus into the kitchen market by purchasing materials direct from cabinet and other fixture manufacturers. In turn, they would be sold to some of the area’s largest and prominent builders and contractors within Vella’s wholesale division. This move also allowed Vella Bath and Kitchen to be more in control of obtaining quality materials at competitive pricing. As the decade went by, Vella purchased a countertop fabrication facility that would further streamline quality, lead times, and pricing. 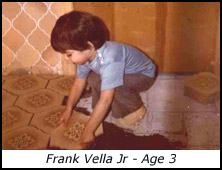 At a young age, Frank Jr., knew his future would be in the family business.He spent his free time after school working and studying the ins/outs of the business. Frank Jr. joined the organization on a full time basis in 1988. Having grown up in the industry, he was ready to lend his personal touch to the continued growth and success of the company.

In 1999, Frank Jr. wanted the business to further stand out from the competition. With that vision, a small plaza was purchased. This new Macedon location would become an expansive kitchen and bath showroom with full culinary center and expanded warehouse. 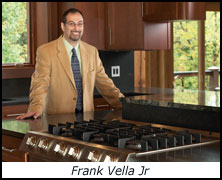 This expansion led to the integration of full-time remodel employees in 2003. This unique combination of being a kitchen dealer and full service remodeling company positioned Vella Bath & Kitchen to be unlike any other company in the industry. The fundamental belief that Vella does not just sell kitchens and baths, rather it offers its clients the opportunity for enhancing their lives, truly transformed the company into one of Rochester’s leading kitchen and bath companies.